We're a family owned & operated business with a storied history now in our fifth generation. With our team of 15 to 20 employees committed to strict quality control, our dedication to sustainable harvest practices, our sales staff's strong focus on customer service, and the clean, cool waters of Lake Huron, we're sure to continue providing a high quality product to our many appreciative customers. 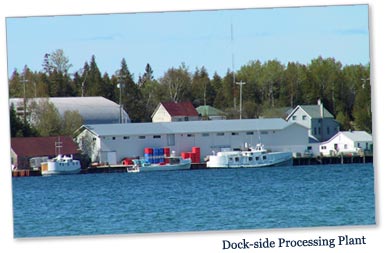 Our dock-side plant houses several modern processing machines which allows us to maximize quality and minimize waste. The dock-side location provides us the ability to process our catches immediately after our boats unload there catch; retaining as much freshness as possible. Our facilities are federally inspected by the Canadian Food Inspection Agency and have a registered Quality Management Program (QMP) which uses the principles of HACCP.

Gill netting is a selective means of catching fish you want to market. The size of the mesh, web strength, and net length and depth, regulate the size of the captured fish, so there is an extremely low incidence of bycatch, or non-target species (fish not intended for sale). Our nets are made of monofilament web imported from Japan and China. The name 'gill' net refers to the means of capture - the fish are unable to squeeze their bodies through the mesh openings, and so are captured in this position because their gills prevent them from backing out of the netting. This effectively traps them.Fish smaller than our target fish simply swim through the net, and those larger effectively 'bang into' the net and change direction, avoiding capture. 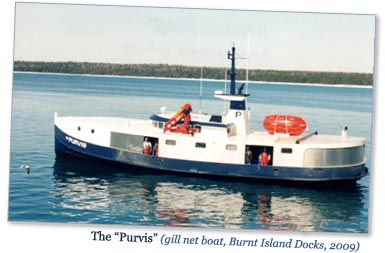 Trap netting is much like you would guess, with one important distinction, its a live trap; the fish are enclosed in a open volume of netting called a 'pot' and remain alive and are able to swim and feed till the trap is raised to surface. Unlike other animal traps, these nets are not baited; their success depends on the fish swimming into the trap and not being able to find their way out. During harvest, the fish are sorted and those which are not wanted, because of either their size or species, are returned to the water alive. This form of fishing requires patients and great knowledge of local waters while placing nets. The enclosure fundamental of this form of harvest allows for a catch of unmatched freshness. The Purvis Fisheries story begins in 1851, when William Purvis and his two brothers ventured from Arbroath Scotland, a fishing port which was, and still is, known as the home of the famous Arbroath Smokies (smoked fish). The three sailed to Canada landing in the province of Quebec and made their way to Hamilton, Ontario. They then started north-west through Guelph, west to Goderich, eventually reaching Kincardine, a port town on Lake Huron - this last stretch of their voyage was made on foot through the almost 50 km of undeveloped woodland. William worked in Kincardine both as police chief and for a political party, and in 1872 was appointed the first lighthouse keeper at Great Duck Island - only 13 miles from our present Purvis Fisheries location. The records show that by 1882, William had started to fish commercially using a Mackinaw sail boat. He built his first steam tug in 1887 and his five sons were soon helping him fish the waters around Great Duck Island. The fish were packed in ice and salt and shipped by boat to Detroit for sale.

By 1902 William and his five sons had formed a partnership called Purvis Brothers. The second generation started to fish for themselves by 1905. Four of the five brothers fished from ports on Manitoulin Island; James fished from Gore Bay, John and Edward from Providence Bay, and Alexander at Great Duck Island. The fifth son, William Purvis Jr., established a fishing business on Lake Winnipeg in Selkirk, Manitoba. 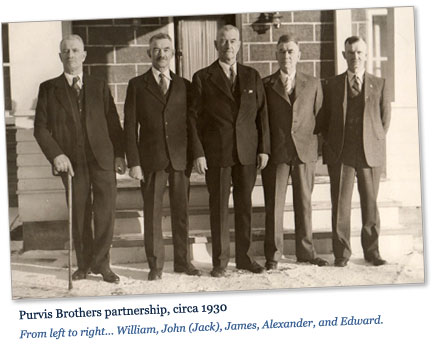 Our present operation at Burnt Island was established in 1920 when Alexander, along with his three sons, moved their operations from Great Duck Island. Alexander and sons George and Leonard, fished from Burnt Island, and the third son Harold, fished from Meldrum Bay. The fish were still shipped by boat, but to Cheboygan, Michigan rather than Detroit, and then by rail to Chicago, Illinois beginning in 1946.

In 1962 George Purvis Jr., Alexander's grandson, took over Purvis Brothers. Ltd. Like all multi-generational businesses, the fishery has experienced a notable evolution over the years; from shipping product by water and rail in ice harvested from Lake Huron, to shipping the fish packed in man-made ice on refrigerated trucks; from fishing in a Mackinaw sail boat, to steam tugs, to fishing with diesel tugs; from operating free of electricity and modern roadways, to functioning under modern equipped facilities. One constant over the last 80 years can be seen in our company logo, the Blue Fin. Designed and built by Alexander Purvis, this tug is still hard at work fishing six days a week. We also proudly emulate the Arbroath Smokies of the 1850's in our own smoked fish products.

George Purvis Jr's. two children, Drew and Denise, have recently taken over the family business - now in its fifth generation - and have created a sales division called Purvis Fisheries Inc.

Learn about Ocean Wise™ Recommended.We've joined over 450 participating Ocean Wise™ members, all having committed to providing ocean friendly alternatives to our customers. It’s your assurance that you are making the best choice to ensure the health of our lakes and oceans for generations to come.

We've assembled a couple of our favorite recipes along with some additional info about the many health benefits of fish.